In an era where family schedules are jam-packed, there is so much busyness in the name of being active. Why do parents sometimes feel as though a child who isn’t on a sports team is missing out on an experience compared to their peers? Not all kids enjoy organized sports, and that’s OK!

Some kids find participating in team sports to be a source of anxiety and intimidation. “Competition and comparison of themselves to peers can contribute to anxiety and fear of failure,” says Maria Kanakos, Psy.D., clinical psychologist and co-founder of FamilyFirst Psychological Services in Vienna, Virginia. What’s most important is finding the right outlet for healthy movement.

“Regular physical activity is proven to have tremendous benefits for children and teens. It activates natural endorphins that decrease stress and negative emotions, and it strengthens immunity,” adds Kelly Theis, Ph.D., also a clinical psychologist and co-founder at FamilyFirst. “It develops persistence, frustration tolerance and self-esteem.”

Building habits for a lifetime

“Adults actually learn fitness from their activity base as youth,” explains Ryan Gadow, senior vice president of membership experience for The Y in Central Maryland. “If they haven’t engrained a sense of activity at a young age, it becomes harder as they become older to keep up with that fitness level.” He stresses connecting kids with something they can maintain over their lifetimes.

When the activity is enjoyable, it is more likely to have staying power. “Often, when we find the right environment for a kid, we want to keep hitting that button and taking it to the next level,” cautions Gadow. “When a kid starts seeing success in a sport, and the level of competitiveness ramps up, the ‘fun’ level might go down.”

Movement is more than sports

“There are so many more activities that a child can be involved in compared to when their parents were kids,” says Jason E. Boye, Ph.D., pediatric psychologist at Nemours Children’s Hospital in Delaware.

Gadow reminds parents that sports encompass more than baseball, football and soccer. “There are activities (like rock wall climbing) that people don’t put into their traditional model of ‘sports’ but that give movement and socialization. Some adults found joy or success in a particular sport in their youth and try to duplicate the experience for their child, but self-discovery is more important. The kid that opts out of lacrosse for baseball or opts out of soccer for hiking is finding their own path.”

Your kid could spend hours hitting balls at the batting cage but never want to join a baseball team. Your son or daughter could enjoy swimming laps but not want to compete. So what? “Some children prefer solo activities,” says Boye. “Our role is to work with kids to identify their particular interests and think about how we can incorporate movement and activity.”

Kanakos says that team sports often require a high level of commitment. “The level of competition in many sports has increased such that only the best athletes and the ones training year-round are the ones to experience success.”

It can be an overwhelming prospect. “Physical fitness doesn’t have to seem daunting,” Theis advises. “Any movement in a child’s day is better than no movement: playing basketball in the driveway, walking the dog, playing hopscotch, stretching in front of the television.” Talk about what your children like to do rather than picking an activity for them.

Even when you find the right activity, don’t be alarmed if your kids need a break from participating on a sports team. “Kids will come to it on their own when they are craving activity,” says Gadow.

Idleness isn’t all bad, in moderation. “Everyone should spend time doing things they enjoy, including video games, as it helps improve mood,” grants Boye. “It’s important to balance inactivity with activity. The AAP (American Academy of Pediatrics) recommends no more than two hours of screen time per day. Parents can use this as a guide and work with children to identify activities that involve more movement.”

In more recent years, opportunities to participate in activity with other youth have been comparatively limited. “Now it might take a little more push and pull to drive kids to activities because we’ve become more isolated,” affirms Gadow, particularly in light of the COVID-19 pandemic. “You should help guide them. Taste a variety of activities, and if a kid says, ‘I don’t like this,’ don’t be afraid to say, ‘OK, we’re done,’ and move on to something else. It shouldn’t feel like punishment.”

Consider tying activity to their interests. “I’ve had teenagers who love to spend time on the phone with friends, so we incorporate spending some of this phone time walking or using the treadmill,” says Boye. “For younger kids, it’s important to have parents and caregivers involved in the activity to engage children. We think of shooting baskets or throwing a ball around, but we can also think of more game-type activities (races, playing tag) that can be done together.”

Some parents benefit from outside help with encouraging kids to be active. “Youth fitness businesses are becoming more common. Seek ones that prioritize inside-out, holistic development of physical fitness, mindset, character, leadership and athleticism,” suggests Simpson.

“Find a mentor—only one in four kids has one—someone young enough to relate to, but old and experienced enough to impart wisdom that is influential and that they will act upon. When given the tools, resources and positive encouragement from what they’ve been craving, I’ve witnessed kids go from incredibly fearful to extraordinarily confident.”

When in doubt, sweat it out

“Some people tell their kids, ‘I don’t care what activity you are doing, but you need to get outside for 30 minutes, and when you get back you need to be sweaty,’” says Gadow. “Running around and just being kids is beneficial.” Every kid can have fun on that team. 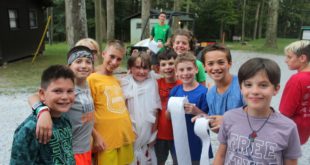 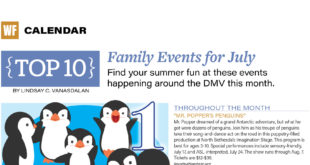