What do a dodo bird, a unicycle and a high school math teacher have in common? They each play a role in “Raph’s Tale,” a new book by Rockville’s Dr. Dan Shapiro that is chipping away at the “affordability and availability crisis” in the field of developmental and behavioral pediatrics.

Shapiro, affectionately known by patients as “Dr. Dan,” graduated from The George Washington University School of Medicine and Health Sciences. A Michigan native, he stayed in the D.C. area after completing his residency at Children’s Hospital and practiced general pediatrics in Silver Spring for more than a decade. It was during this time, Shapiro says, that he began to recognize the demand for advice on parenting challenging children.

“I found as I was taking care of one child at a time that it became unsustainable. Services for doctors are expensive, insurance doesn’t always cover it and there aren’t too many of us doing this kind of work,” he says. “So I thought, ‘Hey, sometimes bigger is better.’”

With this motto in mind, Shapiro created a ten-session training program where parents could find answers to their burning questions about raising developmentally different or otherwise troubled kids. Shapiro uses a pay-what-you-can model in the group to ensure that income would not be a barrier to his help for any family.

Out of this training program came Shapiro’s first book, “Parent Child Journey: An Individualized Approach to Raising Your Challenging Child.” His services as a behavior consultant became more highly sought after in the coming years, and he began shifting his focus, becoming a leader in developmental and behavioral pediatrics, which covers a range of conditions, from autism and ADHD to sleep and mood disorders.

As Shapiro honed his skills in diagnosing and treating developmental differences, he realized another area in which his field was lacking—guidance on managing self-control problems in children. From this realization came his second book, “Parent Child Excursions: ADHD, Anxiety and Autism.”

ICYMI: What it’s like to raise a child with disabilities

So why did Shapiro make the switch from writing books about challenging children for parents, teachers and clinicians to writing books for the children themselves? That’s where the high school math teacher comes in.

“For each book, I teamed up with this wonderful illustrator, John Watkins-Chow, who’s actually a math teacher at a private school that my kids attended,” Shapiro says. Chow is well-known amongst students for creating works of art on the chalkboard to demonstrate mathematical concepts during his classes.

“My understanding is kids would protest when he took the eraser to these drawings at the end of each day,” Shapiro says.

When Shapiro was considering ways to make his first two books a bit less bland, Chow came to mind. He helped bring to life a fable of Shapiro’s imagining: the voyage of a dodo bird named Raph and the animal friends who help him along the way. 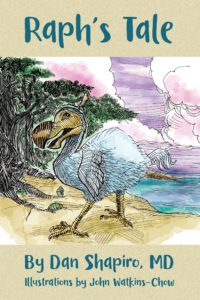 The fable first only existed in the margins of “Journey” and “Excursions” as a metaphor for the books’ several themes. Raph, who cannot fly, is meant to represent a child with a disability— a “bird of a different feather.” Instead, he rides a unicycle that requires him to find a balance between speeding up and slowing down, a task faced by children with coexisting self control issues.

Hawk symbolizes the parent of a developmentally different child, who guides Raph on his journey to find the Tambalacoque fruit even as the pair struggle to compromise and understand each others’ motivations. Turtle and Dog, who befriend Raph after Hawk flies away at the end of the first book, exemplify the extremes of inhibition and excitation that are typical in children with anxiety and ADHD, respectively.

Parents encouraged Shapiro to turn the sketches into a proper full-color picture book, and “Raph’s Tale” was born. Shapiro relied on his love for kayaking down the Potomac as inspiration for Hawk and Raph’s river ride, and the idea of Raph using a unicycle as a mobility aid came from Shapiro’s own affinity for the one-wheeled mode of transportation. The tale is heartwarming, silly and full of references to bird poo. But Shapiro says the story serves a purpose greater than eliciting giggles at bedtime.

“What about being born different? Not being able to fly when all the other birds can fly, how do you make the best of life? What about diversity, what about resilience, what about bringing people together to help individuals? The story is my attempt to get kids thinking about these things and talking with their parents about them,” he says.

“Raph’s Tale” (and Dr. Dan Shapiro’s two parenting books) are available to purchase online, and free printable “Raph’s Tale” coloring pages can be found on Shapiro’s Parent Child Journey website. Ever true to his mission of accessibility, Shapiro is launching his book with a free Zoom bedtime story on Thursday, Oct. 22.