It’s probably not an exaggeration to say that John Gallagher eats, breathes and sleeps comics. An award-winning artist, Gallagher writes and illustrates them, lectures on them and teaches kids and adults how to create their own. He even co-founded a nonprofit organization to promote the literary value of comics and graphic novels.

We spoke to the Fairfax, VA, dad of three about his new graphic novel for kids, his children’s favorite books and how parents can encourage their reluctant readers.

What inspired you to write “Max Meow: Cat Crusader,” your new graphic novel about a cat who becomes a superhero after snacking on a space meatball?

I was teaching an afterschool comics class and started the first session with an open ended drawing exercise. A handful of kids knew immediately what they wanted to do and sat down and began drawing. The remaining kids just sat there, reluctant to get started, for fear of not drawing something imaginative or spectacular enough. I began brainstorming with this group and together we created a superhero cat, then added a scientist and a robot, and silliness ensued from there.  Soon we had made a comic for our caped cat, but had to cut our story short due to class ending. The next class I began a new lesson but the same kids instead wanted to continue with the cat hero story to see what would happen next. I could tell there was something special about this hero cat and his scientist friend—and the story eventually developed into “Max Meow, Cat Crusader.”

Grownups and kids have a very different sense of humor. How did you know whether Max and Mindy’s hijinks would amuse the elementary-school age crowd?

My three kids have been my best (and sometimes toughest) audience for testing stories and jokes. My youngest, Will, 13, helped with some of the character names and story elements for the first book and made a great sounding board. I wanted to get him involved because he was a reluctant reader, but graphic novels, especially Dav Pilkey’s Dog Man series, became his favorite type of reading. Max Meow held Will’s interest, and he became further engaged in the process. This led to him reading the story over and over and, ultimately, to Max being a more enriching and entertaining character.

You’re also the co-founder of the Kids Love Comics, a nonprofit that uses graphic novels to promote literacy. Tell us a little bit about the organization and your role in it.

Kids Love Comics was formed as a united effort by kids’ comics creators to help show parents and educators that kids really do love comics!  The organization was formed during a time when graphic novels were not as mainstream and widely embraced as they are today, but with the help of teachers, and especially librarians, we spread the word that comics were not only REAL books, but had literary value. And, they are fun to read! Recent years have seen graphic novels like “Smile” and the Dog Man series become New York Times bestsellers. Kids Love Comics has provided educators with listings of family-friendly comics and librarians are now routinely referencing and sharing these lists. The organization has grown from resource sharing to educational outreach, now offering virtual author visits and comic creation classes to schools, libraries and special interest groups. 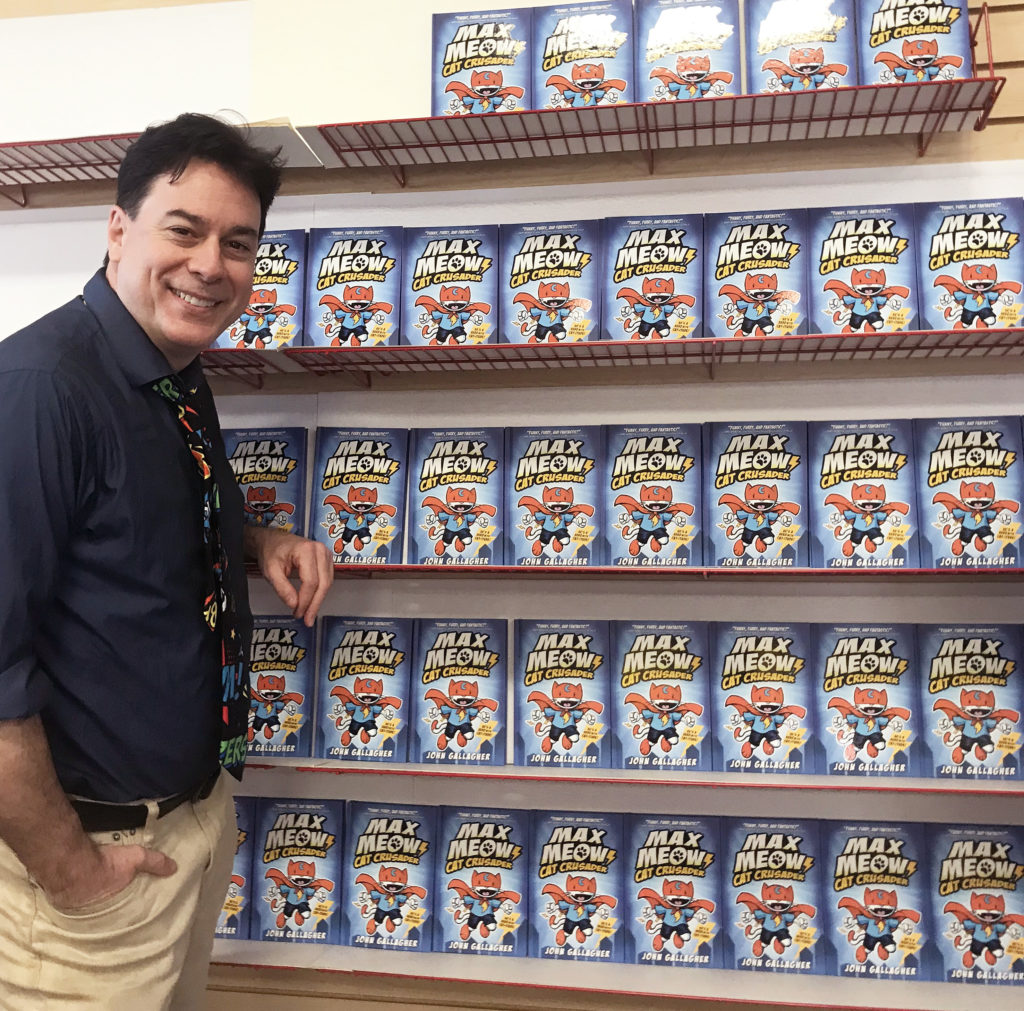 Each has had favorites through the years, with my daughter Katie enjoying the Bone and Baby Mouse series, and her brothers Jack and Will reading “The Dumbest Idea Ever,” “New Kid,” the Amelia Rules series, “Smile,” the HiLo series, the Amulet series and the Dog Man series, to name a few. They have also had a healthy appreciation for classic comics such as Garfield, Calvin & Hobbs and Cul-de-Sac, which we all still read on a regular basis. What is wonderful is that comics became a gateway to enjoy many different types of reading.

What fun things have you and your family been doing during the pandemic?

Beginning in May, my wife and I started a family routine we dubbed “Cul-de-Cinema” where we’ve been watching movies projected on a tarp in front of our house every weekend. This has been fun escape, especially once we all agree on the movie!  We’ve also been taking lots of walks and have done some biking on the trails behind our house. Our golden retriever is likely the biggest supporter of the togetherness we’ve all had!

What advice do you have for parents of reluctant readers?

Being the parent of a reluctant reader, my advice would be to introduce your young reader to a large variety of materials—from storybooks and comics to magazines and trivia or joke books—until they find out what makes them want to read. Then seek out those types of books. The balance of text and artwork in graphic novels is what held Will’s interest as an early reader. This was a jumping off point, and we kept seeking out similar graphic novels and his world opened up from there. A school or public librarian can be so good at helping your child find the perfect, or at least, a perfect starter book. I can’t say enough about librarians—they are a wealth of knowledge and love to work their magic in pairing kids’ interests with books.

A version of this story originally appeared in our December 2020 issue.

PJ Feinstein is the editor of Washington FAMILY and the mother of two elementary school-age boys.
Previous Pediatrician-recommended Tips to Help Your Child Take Medicine
Next How to Make Clay Rainbow Ornaments