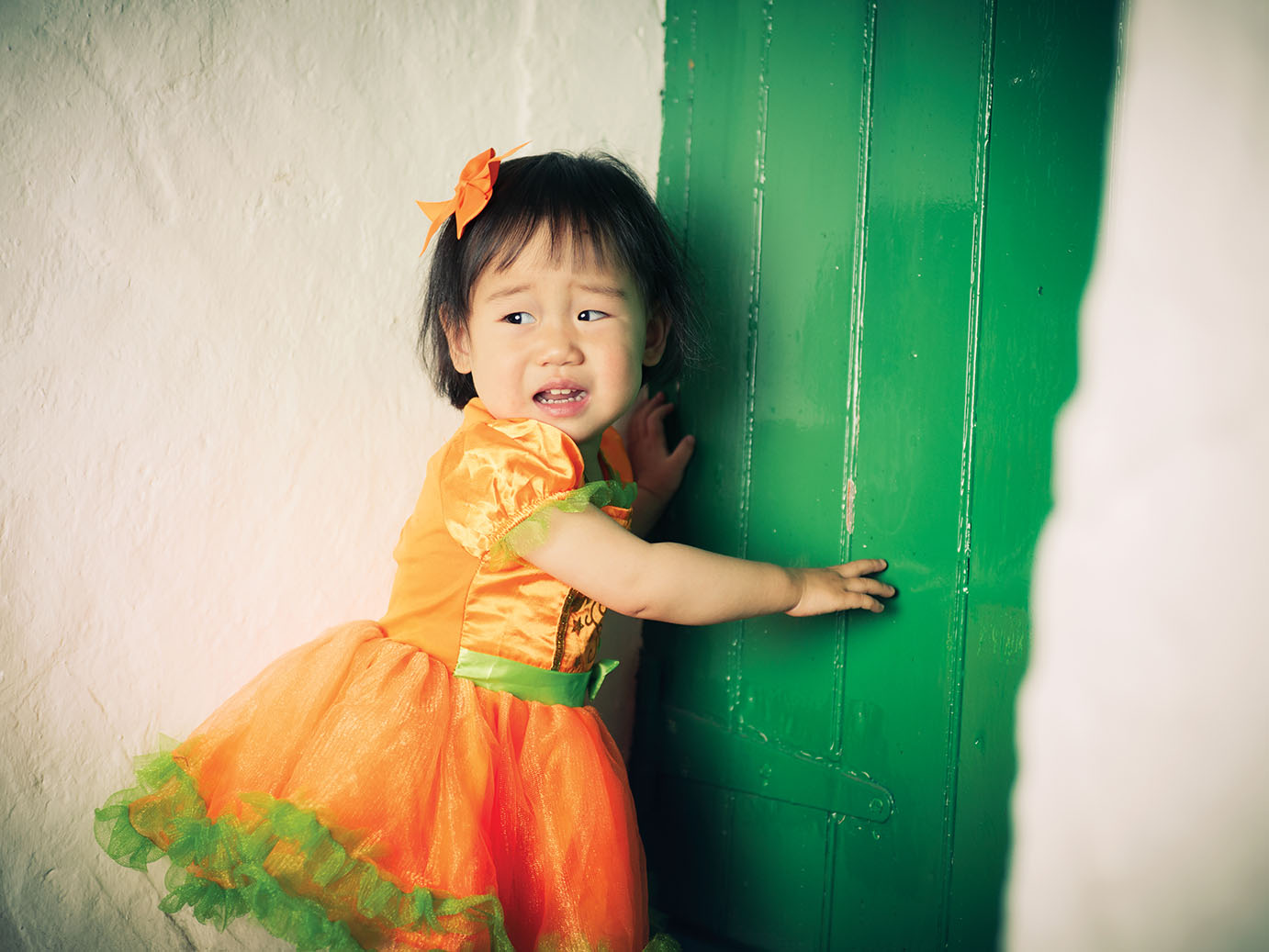 For some children, Halloween is a time to overindulge in candy, take on a new identity for a day and witness spooky decorations transforming houses into macabre homes. However, the holiday can be an anxiety-inducing time for others.

Ghosts, spiders, blood, the dark, scary costumes, goblins and clowns are some of the common stressors for children. Animatronic decorations that come to life through sensors when someone walks by can also be alarming for some kids.

How can parents help tame their children’s fears of the things that go bump in the night?

Age is a factor

Dr. Eileen Kennedy-Moore, a New Jersey-based psychologist and author of “Kid Confidence: Help Your Child Make Friends, Build Resilience, and Develop Real Self-Esteem” (New Harbinger Publications, 2019), notes children up to age 8 are scared of things that look strange or move suddenly. Around 9 years old, they begin to understand that death is permanent and personally relevant. Death and getting hurt may become scary to them.

“Children’s fears grow along with their imagination. As they can imagine bad guys and spooky things, that is when they start to become scared of these kinds of things,” she says.

“Basically, fears or scary stimuli activate the fight-or-flight response in all individuals — kids and adults alike,” she says. “That is really our immediate reaction to whatever the feared item is, and for young kids, this is their main response.”

As kids grow older, she says, their brains develop more. While they may still have an initial response to something scary, they also possess the ability to reason it out. “‘Is this something I should be afraid of, or is this not something I should be afraid of?’ They have more past experiences that they can bring to bear there,” she adds. “It doesn’t necessarily mean that in that moment they will use that information, but they could.”

What’s particularly challenging is that younger children don’t precisely know the difference between reality and make-believe. “Halloween can really bring that out,” Bettencourt says. “Are ghosts real? Are goblins real? Are all those other costumes real, or is that make-believe? We really don’t see kids have that capacity to differentiate until around 6 or 7 years old.”

Kennedy-Moore notes that even though we can imagine something, it doesn’t make it real or likely. “I say that every day with clients — even adult ones,” she says. To help one client who was afraid of anyone in a costume, she asked the person to put on a Halloween mask, snap a picture while wearing it and normalize putting the mask on and taking it off just to get used to the concept.

According to Bettencourt, one of the best ways parents can help their kids is calmly talking to them to validate their feelings and correct misinformation. “A lot of times kids are scared because they have really built up the thing in their mind,” she says.

Kennedy-Moore adds that parents should talk to their kids about how they are in charge of their children’s safety and would not put them in a dangerous situation.

The experts we spoke to encourage parents to still have their children partake in Halloween events. Many fall-related activities, such as farm visits to pick pumpkins, corn mazes and apple picking, are linked to Halloween.

When a child has anxiety over Halloween, parents may act unknowingly to intensify the fear. One way is to protect the child from everything involving the holiday. “Sometimes avoiding something you fear will only strengthen or emphasize that fear,” says Dr. Ami Patel, pediatrician at MedStar Georgetown University Hospital in Washington, D.C. “While I don’t think children should be pushed into something overwhelming, it’s ideal to prepare them and have them participate in some way throughout the month and holiday.”

However, some parents can be overly dismissive of a child’s fear. Others may mock a child’s fear or deliberately scare a kid. “That is not kind, and it is not helpful,” Kennedy-Moore says. “When we are talking about building up their tolerance, we are not talking about surprising them with the worst possible thing. It is baby steps toward whatever it is they are scared of so that they can learn for themselves: ‘I am strong enough to handle this.’”

Parents can help positively build excitement around Halloween by planning ways to celebrate and helping a child put on a costume several times. If your child sees someone in a scary outfit, empathize with your child but also point out details such as hair sticking out and makeup as a way to humanize the person in the costume and take away the fear.

Patel recommends normalizing the Halloween experience for kids in the following ways:

Trick-or-treating is still encouraged, but parents may want to make adjustments, such as going out earlier in the evening so that costumes don’t combine with the dark to make things extra scary. If children are wearing a Halloween mask as a part of the costume, parents should make sure their vision is not limited. Inviting a friend to come trick-or-treating is also a good way to focus on the experience of being with a friend versus worrying about the other folks around them.

Ultimately, parents need to remember that every child is a unique individual. “Comparisons are not helpful. ‘Well, your cousin likes this.’ OK. Good for the cousin,” Kennedy-Moore says. “We deal with the kid in front of us, and if this particular child at this particular moment is scared, then we gently help them move forward from that.