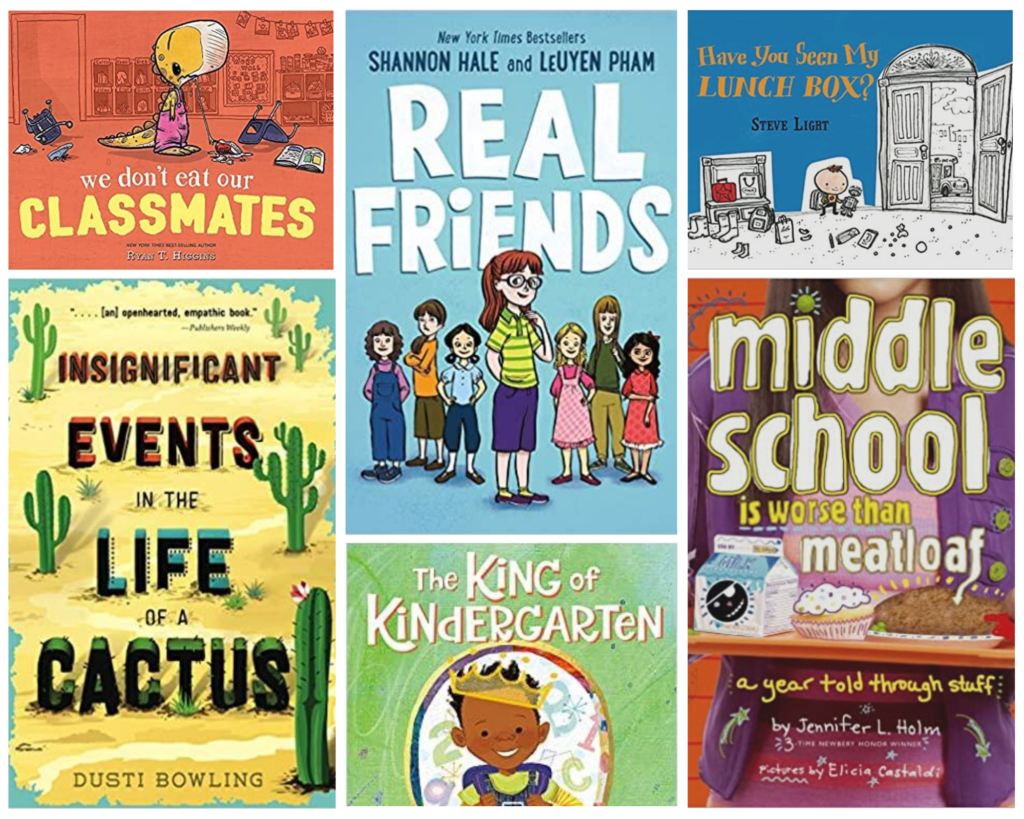 The first day of school is always ripe with possibility for what the year will bring. When school started last fall, none of us could have predicted how the year would end. This year is starting very differently than years past, making the possibilities of what may come next that much bigger.

None of these back-to-school books address the pandemic, but they all look at the change every new school year brings. 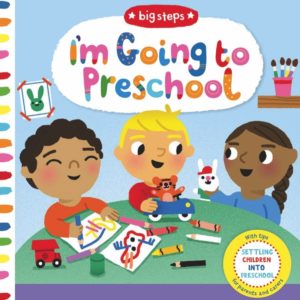 ‘I’m Going to Preschool’
Written and illustrated by Marion Cocklico
Ben’s nervous about his first day of school, but he finds his cubby, joins circle time, makes new friends and enjoys himself in this comforting read designed to prepare children for their own first days. Young readers will enjoy the bright illustrations full of flaps to lift and other manipulative features. Parents will appreciate the tips on each page to help their children transition to preschool.

‘Have You Seen my Lunch Box?’
Written and illustrated by Steve Light
Many parents will recognize the scene that plays out in this seek-and-find board book. It’s time to catch the bus, but first the young protagonist must find his school things amid a jumble of other household items. Careful use of color against the black-and-white illustrations make items easy to spot for young readers.

‘Pete the Kitty’s First Day of Preschool’
Written and illustrated by Kimberly and James Dean
Crowd-favorite Pete the Cat stars in a line of board books about his younger days. On his first day of preschool, when asked if he’s nervous, he says “No, I’m cool.” He has his cool new backpack and art supplies and is ready to go. While at school, he does many typical preschool activities like singing and painting. At the end of the day, he doesn’t want to leave! Older readers may want to opt for “Pete the Cat: Rocking in my School Shoes.” 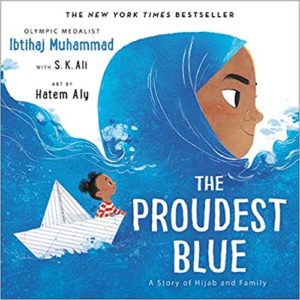 ‘The Proudest Blue: A Story of Hijab and Family’
Written by Ibtihaj Muhammed and S. K. Ali, illustrated by Hatem Aly.
Faizah’s ready for the first day of school with her new backpack and light-up shoes, but she’s even more excited because her older sister, Asiya, has started to wear her hijab. Mama wanted her to pick a nice pink, but instead she chose a bright, proud blue. But when Asiya is teased on the playground, Faizah has to find a way to be strong. Luckily, Asiya shows her how to handle the bullies in this powerful and uplifting story about the bonds of sisterhood.

‘We Don’t Eat Our Classmates’
Written and illustrated by Ryan T. Higgins
Penelope is excited to start school and can’t wait to meet her classmates. Unfortunately, her classmates are all human and Penelope is a T Rex—so she eats them. Even though she spits them out, eating your classmates isn’t the best way to make friends. When the hungry class fish shows Penelope what it feels like to be a snack, she’s able to make amends.

‘The King of Kindergarten’
Written by Derrick Barnes, illustrated by Vanessa Brantley-Newton
After his mother tells him he’ll be the King of Kindergarten, a young boy can’t wait to start school. On the first day he puts a royal spin on everything (instead of the school bus taking him to school, the yellow carriage takes him to his towering fortress). The result is a fantastic first day. Readers will see many routine classroom experiences filled with a positive energy to get kids excited for their own first day. 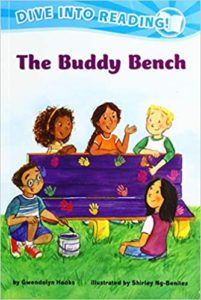 ‘The Buddy Bench’
Written by Gwendolyn Hooks, illustrated by Shirley Ng-Benitez
Padma loves school and playing with her friends. When she notices a boy sitting all by himself at recess, she works to create a Buddy Bench—a place for kids to sit to signal that they would like to be asked to play. This early reader is a great introduction to the Buddy Bench, which are becoming more common on school playgrounds.

‘The Best Seat in Kindergarten’
Written by Katherine Kenah, illustrated by Abby Carter
Sam’s pretty nervous for his first day kindergarten. As a fun activity, his teacher takes the class on a nature walk and when they return to class, everyone gets to share something they found on the walk. A reassuring story about the big feelings that can accompany starting school.

‘Big Shark, Little Shark Go to School’
Written by Anna Membrino, illustrated by Tim Budgen
Odd-couple Big Shark and Little Shark are off to school. Little Shark shows up extra early for the bus, but Big Shark is running so far behind, he doesn’t arrive until the bus has come and gone. Now how will the friends get to school? While the plot line won’t happen to many human students, young readers will enjoy these fun shark antics. 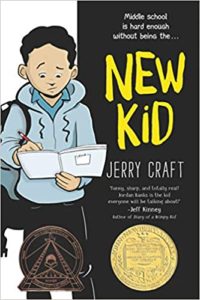 ‘New Kid’
Written by Jerry Craft
Jordan loves art—especially drawing cartoons about his life. He wants to go to art school, but his parents send him to Riverdale Academy instead, a prestigious school known for its academics. At his new school, Jordan is one of one a few non-white students, which brings many challenges, such as regularly being confused with the few other Black kids. Meanwhile, he also struggles to stay true to his friends from the neighborhood even though they are no longer classmates. A moving graphic novel about staying true to yourself.

‘Insignificant Events in the Life of a Cactus’
Written by Dusti Bowling
Due to a rare genetic condition, Aven Green was born without arms, but she likes to tell people she lost them wrestling alligators. Moving across country so her parents can take over an old theme park is hard enough, but Aven also must deal with all the questions and comments about her body as she starts at a new school. After a rocky start she befriends a boy with a disability of his own, and the two work together to solve a mystery about the history of theme park.

‘Real Friends’
Written by Shannon Hale, illustrated by LeUyen Pham
Award-winning author Hale tells a poignant and familiar story of changing friendships in this graphic novel memoir. Shannon always felt like the odd-one out, but she found a great best friend in Adrienne. Over the years, Adrienne becomes one of the most popular girls in school, and Shannon suddenly feels like an outsider looking in. Hale is careful to show the sympathetic side to mean characters as well as highlighting her own mistakes as she finds her own place and real friends. 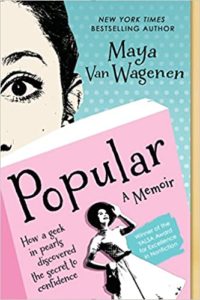 ‘Popular: A Memoir’
Written by Maya Van Wagenen
At her Texas middle school, Maya is at the bottom of the popularity ladder. Figuring things couldn’t get any worse, she decides to live by the advice she finds in a 1950s popularity guide and document the results. While the pearls and girdle work against her, Maya gains a lot by widening her social circles and interactions. Maya’s voice shines as she documents the harder parts of living on the Texas/Mexico border during the drug war as well as her failures and ultimate successes with decades-old, but timeless, advice.

‘Her Royal Highness’
Written by Rachel Hawkins
In this fizzy companion to Prince Charming, heartbroken Millie decides to apply to boarding schools far, far away from her Texas home. She lands at a prestigious school in Scotland, where her roommate is a literal princess. At first, Flora seems every bit the selfish entitled brat the tabloids make her out to be, but Millie soon gets to know the troubled and unhappy girl beneath the tiara and a wonderful friendship and possible romance bloom. But if starting a new school in a new country was hard, dating a royal is a whole new level of intensity that Millie doesn’t know if she’s prepared for.

A version of this story was published in the August 2020 issue of Washington FAMILY. 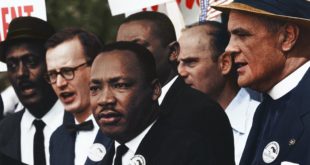 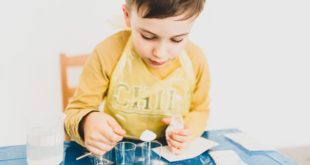 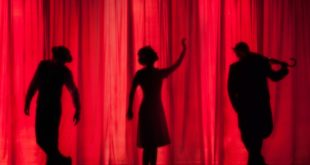