It’s almost bedtime. I can tell not by the time on the clock, but by the behavior of my 2 1/2-year-old. She gets “loopy” when she’s tired. After demanding her daddy lay in our bed with her, while his defenses are down, she climbs on top of his head, giggling from deep in her belly as he tickles her and flops her down on the mattress, where she quickly
scurries back up for more.

They play-fight for five minutes—she dishes it out as well as she takes it. When I announce it’s time for pajamas, she half-allows me to wrestle her into them before promptly ignoring my request to sit down quietly for books, instead running into the office to drag Daddy into her room so they can shoot hoops before bed.

He obliges, taking the bright orange plastic ball and pretending to go for a layup before she sticks a tiny hand out to smack it away. Blocking his shot, she squeals with glee and pride. She offers me the ball, quickly reconsiders and decides to go for her own dunk, after which she bends her knees and lets out a guttural tiger growl, flexing to expose her muscles.

She is my wild girl.

When I found out I was having a girl, I panicked. I don’t know how to apply make-up. The only thing I know about the Kardashians is that their dad was an Olympic track athlete. Heels frighten me. The idea of going shopping makes my heart palpitate. I have difficulty relating to common gripes women tend to commiserate around.

But what didn’t cross my mind initially—and should have—was that I was prescribing my own societally-ingrained views of womanhood and femininity to a person I didn’t even know yet. The fact that I am a woman and have these feelings and affinities didn’t seem to factor into my notion that my daughter may, or may not, innately enjoy the things girls “traditionally” gravitate to.

She was four months old when we discovered she loved cars. Having inherited an aversion to naps from her mother, she needed some coaxing to rest. By happenstance, my stay-at-home husband played the movie “Cars 3,” hoping it would calm her down. To his surprise, she watched almost the entire thing.

That was the catalyst that sparked purchasing a car-shaped Batgirl walker, “Cars 3” paraphernalia, toy cars she could push down on and send across our hardwood floors, a remote-control car and an activity toy for the stroller shaped like a dashboard. Every time we revved the engine, her face lit up. We watched Formula One daily, and my husband pulled out a steering wheel from one of his old video games so she could drive along, spinning the wheel and shifting gears without our instruction.

No one believed it until they saw it. My old-school grandmother assumed, because I was not drawn to traditionally feminine things, that I was pushing her into it. Which couldn’t have been further from the truth. The fact is, I have a wild girl.

She loves going fast, taking chances, testing her limits and her boundaries. She loves to see how high she can jump, how long she can hold her balance, how fast she can run, how loud she can scream. My husband calls it “all gas, no brakes.”

She is also incredibly meticulous and purposeful. She puts all her toys and books away before she goes to bed. She is the cleanest toddler I have ever seen eat. She gets upset with me when I pick out socks that don’t match. And when she gets upset, she closes her eyes and takes a deep breath.

Feeling a meltdown coming on? Give yourself a mommy time-out.

Before my daughter was born, I only focused on the ways in which I assumed she would be different from me, on the ways in which we would clash. The inevitability of her rebellion was a fact, not a question for me. I alienated a female community. I saw other women as competition or weak. I aimed at perfectionism and “doing it all” because maybe you couldn’t, but I definitely could.

What I didn’t expect was to feel a close connection to her, an us-against-them, a powerful bond that gave me the confidence to change how I viewed femininity.

After exhausting her basketball moves, she finally comes to sit on my lap. Her baby sister lies by my side. She insists on turning the pages of the Daniel Tiger book as I read. Halfway through, she gets up and walks over to her ball pit, chooses a yellow ball and hands it to her sister. The baby is fussy, and she wants her to have something to play with so I’m not distracted while reading.

All the books are put away, her blanket fanned just how she likes atop her crib, like a tent, her two favorite stuffed animals tucked safely underneath, waiting for her head to nestle into them softly. We do our ritual. First, Daddy’s Handshake: two high-fives, two fist bumps and two thumbs-up with thumbs touching. Next, Mommy’s Bedtime Goodnight: touching heads on the right side, then on the left, nose rubs and a kiss.

I tell her I love her, I’ll see her in the morning and have a good night’s sleep. She might say she doesn’t want to go to sleep yet, but within minutes of the door shutting she is under her “tent” and fast asleep.

For now, my wild girl is tamed. Who knows what she will want to be when she wakes up?

Washington FAMILY is written by parents like you. Want to contribute? Send a story pitch or personal essay to [email protected]
Previous 12 Children’s Books that Celebrate America and its People
Next Weekend Fun: The Best Family Events Around D.C. (July 17-20) 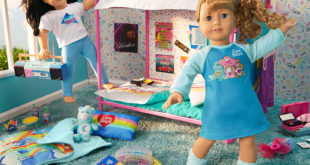 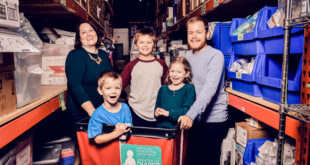 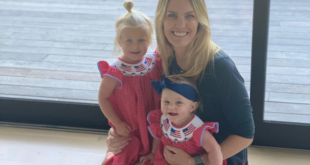